Severe Hyperkalemia Secondary to Hypermagnesemia in a Patient with Preeclampsia

Severe Hyperkalemia Secondary to Hypermagnesemia in a Patient with Preeclampsia

Mg infusion remains the first-line treatment of preventing and controlling eclamptic seizures. While hypocalcemia is a well-known side effect, hyperkalemia is not. We present a case of severe hyperkalemia secondary to magnesium infusion requiring hemodialysis.

36-year-old healthy female with no HTN or liver disease, pregnant at 25 weeks with twins, admitted for close monitoring given concern for intra-uterine growth restriction. Initial vitals on admission: BP 149/88 mm Hg, HR 89, RR 20, and T 36.4. Physical exam: Grossly unremarkable except for gravid uterus. Lab workup showed elevated liver function tests (>2x UNL) and LDH, low haptoglobin, and normal renal function. BP remained >140s with medical treatment. Patient also started complaining of new-onset severe headache. Given concern for pre-eclampsia with severe features, Mg infusion was started (6 grams followed by 2 g/hr as a continuous infusion) and was scheduled for emergent c-section. Post-delivery course was complicated by severe hyperkalemia at 6.6 meq/l in a setting of supratherapeutic Mg levels at 9.1 mg/dl (figure 1). Creatinine was normal at 0.7. Mg infusion was stopped. Other etiologies for hyperkalemia were ruled out including rhabdomyolysis or worsening hemolysis. Patient required one session of emergent hemodialysis which led to improvement in all electrolyte abnormalities.

While the relationship between hypomagnesemia and hypokalemia is well understood, the relationship between hyperkalemia in the presence of hypermagnesemia remains not clear. Some of the mechanisms suggested (1) direct effect of magnesium on suppressing renin and aldosterone leading to impaired renal handling of K homeostasis (hyporeninemic hypoaldosteronism). (2) direct inhibition of the ROMK channel by Mg. Our case highlights a rare cause of hyperkalemia in a pre-eclampsia patient. Monitoring electrolytes closely while on Mg infusion is advised. 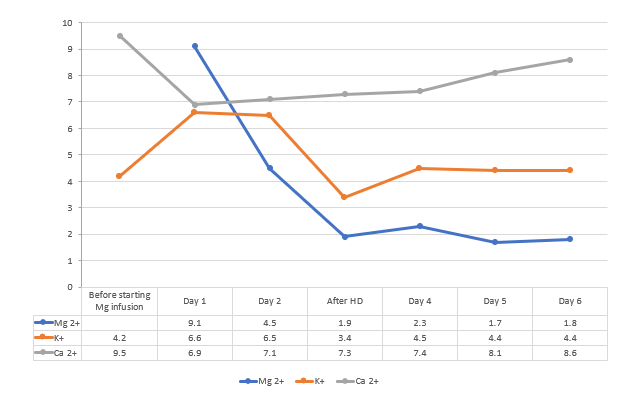