In idiopathic nephrotic syndrome (NS), Steroid-resistant patients with complete or partial resistance to the combination of prednisone and steroid sparing-agents are at high risk to progress to end-stage kidney disease. Considering the toxicities associated with chronic use of these drugs, alternative interventions are urgently needed. IL-1β/IL-1R1 has been recently suggested as a possible mechanism of complement-mediated progression of Focal Segmental Glomerulosclerosis.

A 26-year-old white woman had FSGS (kidney biopsy) presenting with NS and kidney failure. Serum creatinine level was 1.6 mg/dL, urinary protein excretion 20.4 g/d and serum albumin 0.9 g/dL. She received methylprednisolone, 1g rituximab, and CNI with partial remission. Three months later, she presented relapse of NS and acute kidney failure requiring 5 HD: CNI was switched to MMF. Immunoglobulins IV were administered. After 3 months, serum creatinine was 5.1 mg/dL, urinary protein excretion was 18 g/d. Given the lack of improvement/worsening of proteinuria, wet started anakinra, the anti-IL-1R1 (subcutaneously, 2 mg/kg/d for the first week and then 4 mg/kg/d). After 1 year, serum creatinine is 3.4 mg/dL, urinary protein excretion is 5.2 g/d and serum albumin level was 1.3 g/dL. No side effects were reported (Fig 1).

We administered Anakinra in MRNS due to FSGS and CKD Stage IV. After Anakinra, multiple ongoing immunosuppressive treatments were stopped. We acknowledge that Anakinra did not promote full disease remission, but it was associated with a significantly amelioration of the disease clinical. By slowing the rapid progression of kidney failure, the young patient better faced all future perspectives: a pre-emptive kidney transplant in case kidney function worsens is now available.
In conclusion, our data indicate that Anakinra, by antagonizing IL-1β/IL-1R1 signaling, may represent a useful therapeutic option to prevent the progression of kidney injury in advanced forms of nephrotic syndrome. 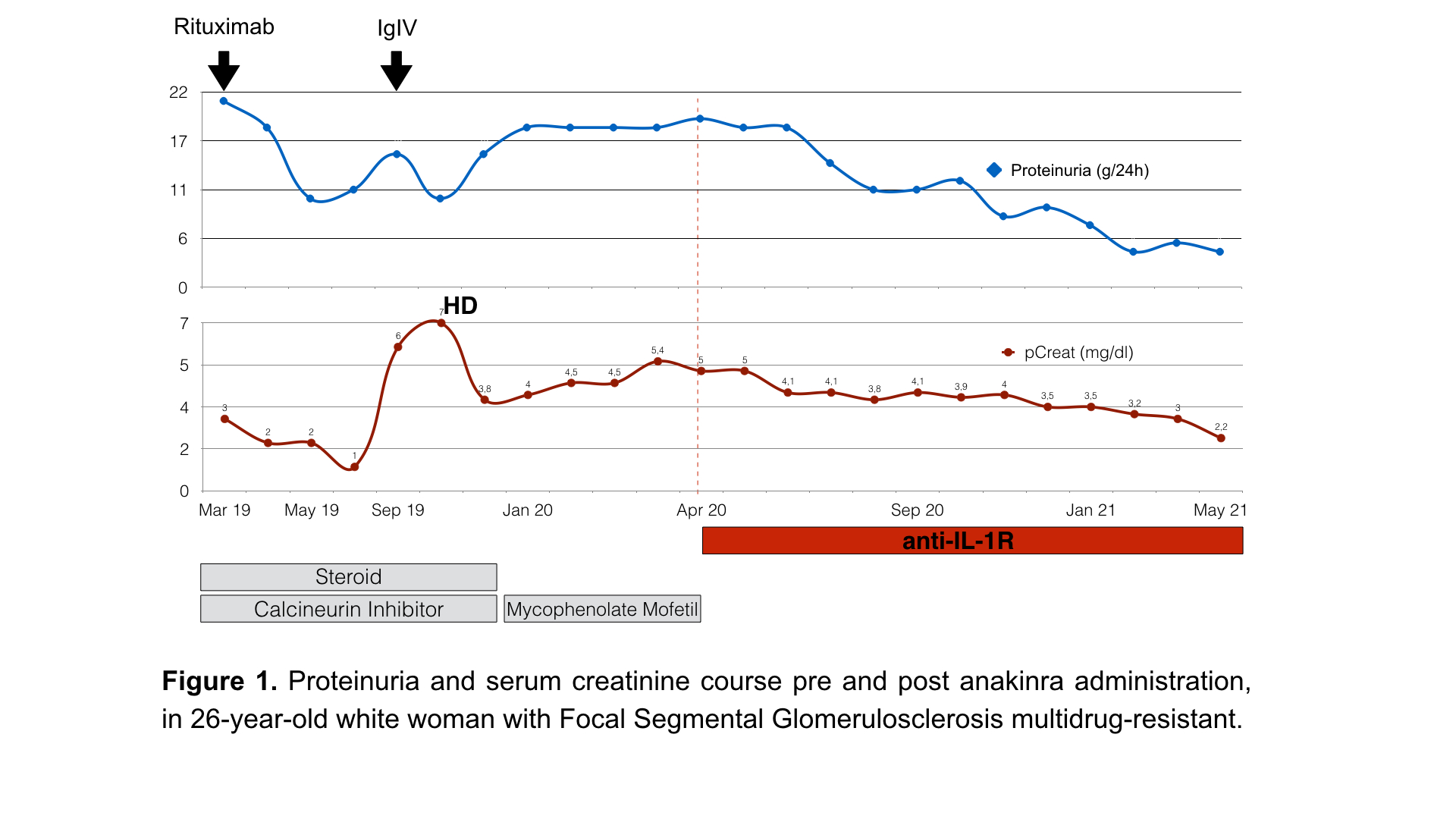