Oxytocin (OXT) is a neuropeptide used in pregnancy to induce uterine contraction. It is structurally related to vasopressin (AVP) by a difference of only 2 amino acids. While it does not have antidiuretic activity at physiologic levels, it can when administered at pharmacologic doses (>20 mU/min). We present a case of severe symptomatic hyponatremia after receiving oxytocin in the post-partum period.

A 31 y/o G1PO woman was admitted with premature membrane rupture at week 38. An IV oxytocin infusion (2mU/min) was started to augment labor. Her serum sNa 6 hrs later was 132 mmol/l (baseline sNa 140). Her delivery was c/b uterine atony and postpartum hemorrhage requiring a bolus of IV oxytocin (10 U over 30 min) followed by infusion at 8 mU/min. The sNa 18 hr later was 118 mmol/l. She reported nausea. Her sOsm was 252 mOsm/kg with UNa of 95 mmol/l and Uosm 880 mOsm/kg consistent with the syndrome of anti-diuresis (SIAD). OXT was suspected and was stopped. 2 hr later, a rapid water diuresis ensued (u vol 150-200 cc/hr, with uOsm 92 mOsm/kg). The sNa 4 and 8 hrs later increased to 124 and 127 respectively. Because of concern for over-correction, she was given DDAVP and D5W. This resulted in a gradual (6-8 mmol/l/24 hr) sNa increase to 140 mmol/l over the next 48 hr (Fig 1).

Therapeutic OXT can result in anti-diuresis with water retention. OXT half-life is only 1-6 min and is further reduced during pregnancy. Women are more likely to have severe neurologic sequelae of hyponatremia so it is fortuitous that the half-life of OXT is so short, and discontinuation alone should result in a rapid water diuresis. Still, although acute hyponatremia can usually be safely corrected rapidly, concern over what could have been an increase in sNa of 28 mmol/l over several hrs necessitated a DDAVP clamp to slow correction. She had a complete recovery.
SOIAD can be a severe complication of OXT. Since it can occur rapidly and severely, sNa should be followed closely when patients are on OXT infusion. 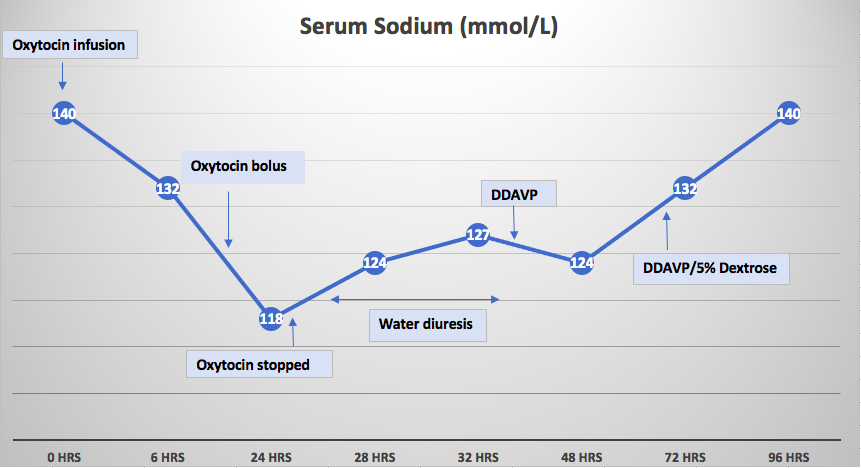