A 69 year old AA female presented with severe abdominal distention.
CT Scan showed a 17 x 10 x 10 cm mass originating in the retroperitoneal region, a 12.5 cm mass in the pelvis and a 4.3 x 2.7 cm mass in the liver as shown in the image.
Further testing showed anemia and renal failure.
Biopsy of the mass revealed multiple myeloma, driving a monoclonal IgG lambda clone. FISH panel was positive for 17P/TP53 deletion which is very unfavorable.
Patient was treated initially with dexamethasone/cyclophosphamide/Velcade and later with Daratumumab/Carfilzomib/dexamethasone without any response and remained on dialysis ultimately succumbing within 6 weeks of diagnosis.

Initial Extramedullary Soft Tissue Mass (ESTM) manifestations in Multiple Myeloma occur in about 3% of the cases.

In a large majority (93.5%) these lesions are solitary.
Our patient had large, multiple masses with high tumor burden and unfavorable cytogenetic signature.
She did not respond to therapy despite utilization of aggressive regimens.

This is a very unique presentation of myeloma and with the unfavorable characteristics, had a dismal prognosis despite aggressive therapy. 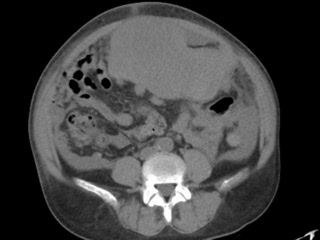