CKD leads to accumulation of fibrotic tissue in the myocardium with subsequent loss of cardiac function. Two circulating biomarkers of collagen type I and III (PICP and P3NP) correlate with the amount of cardiac collagen deposition. Galectin 3 (Gal-3), a predictor of heart failure, is used to stratify patients at increased cardiovascular risk. We aimed to assess the association between eGFR and Gal-3, PICP, and PIIINP levels in individuals with and without CKD enrolled in the Systolic Blood Pressure Intervention Trial (SPRINT).

A random sample of 1026 SPRINT participants 50 years or older were included in the study. Baseline demographic, anthropometric, co-morbid conditions and laboratory data were examined univariately for association with quartiles of Gal-3, CICP and PIIINP. The statistically significant variables were chosen for the multivariate quantile regressions at median (MQR) to assess the association between baseline eGFR and each biomarker.

CKD status modifies the association between myocardial fibrosis biomarkers and eGFR, with high serum Gal-3, CICP, and PIIINP levels associated with low eGFR. Future research is needed to elucidate whether there is a causal link between kidney function decline and risk for myocardial fibrosis. 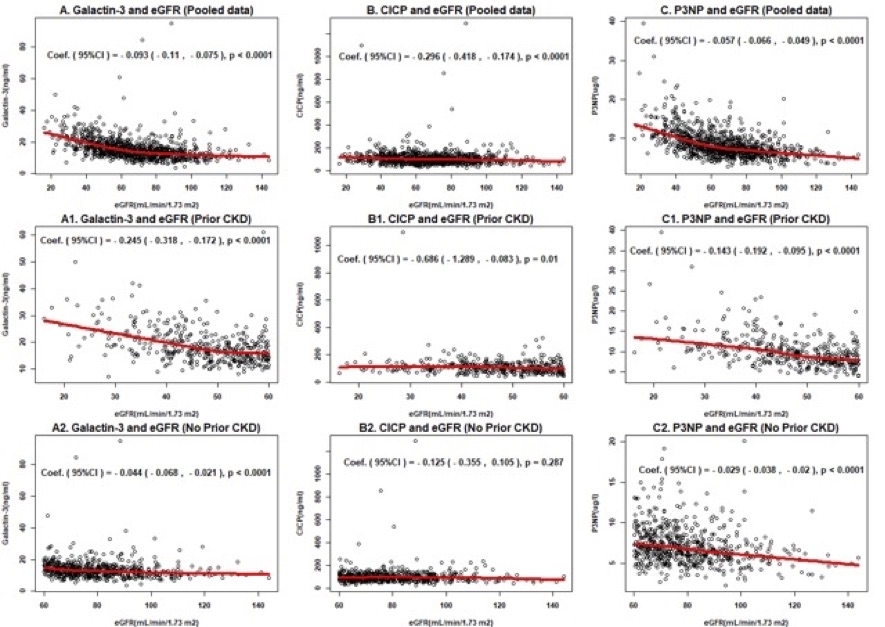