Here we present the case of a 73-year-old male with history of peripheral artery disease and no previous diagnosis of kidney disease who was admitted to the hospital due to acute oliguric acute kidney injury (AKI), four weeks after undergoing an endovascular aneurysm repair with aorto-uni-iliac stent, right femoral endarterectomy and right femoral-popliteal bypass. Laboratory work-up such as complement levels, viral and antibody serologic testing were unremarkable. His hospital course was complicated by anuria, hyperkalemia and hyperphosphatemia. Kidney biopsy (figure 1) showed a foreign material consistent with a hydrophilic polymer embolism, as well as histiocytes with similar ingested foreign material, along with atheromatous emboli, and mild to moderate interstitial fibrosis. Treatment was supportive, including renal replacement therapy (RRT), with improvement in kidney function to the point of having adequate urinary output, no electrolyte derangements and no further need for RRT at discharge.

In this case report, we compare our findings to other reported cases of hydrophilic polymer emboli to increase awareness of this under-recognized cause of organ dysfunction. 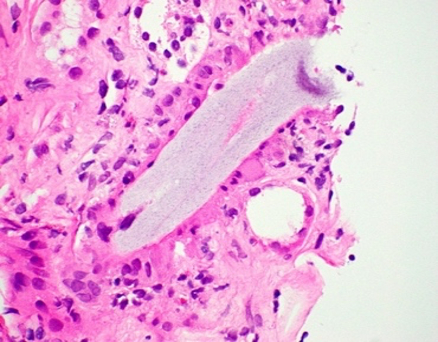