Plasma TNFR1, TNFR2, and KIM-1 have been associated with CKD progression in ambulatory patients with/without diabetes. However, their role as predictors of long-term outcomes and their ability to discriminate such outcomes compared to clinical parameters prior to cardiac surgery is unknown.

Prospective, multicenter cohort study of high-risk adults undergoing cardiac surgery (2007-2010). We assessed the association between pre-operative levels of TNFR1, TNFR2, and KIM-1 (natural log-transformed) and long-term mortality, CKD (incidence/progression), and cardiovascular (CV) events. We also examined the potential effect modification of DM status on the relationship between these biomarkers and outcomes. C-statistic analysis was used to quantify the discriminatory ability of the biomarkers beyond the clinical model. 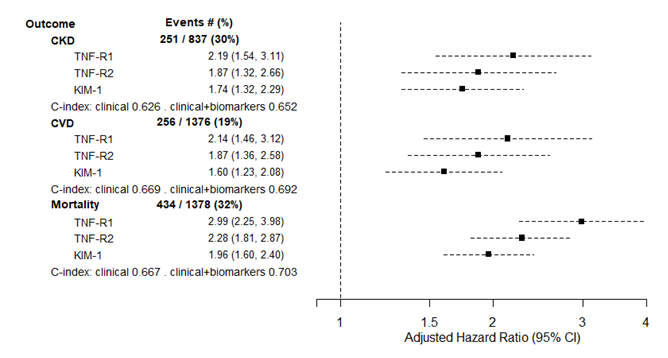