Posterior urethral valves (PUV) are the commonest cause of childhood kidney failure and a major unmet clinical problem in pediatric nephrology. While usually sporadic, familial clustering and twin studies suggest a genetic component that is as yet unidentified. Using large-scale whole genome sequencing (WGS) we sought to understand the genetic architecture of PUV and identify key contributing genes.

We analysed WGS data from 132 unrelated PUV patients and 23,727 ancestry-matched unaffected controls from the 100,000 Genomes Project, seeking enrichment of common and rare single-nucleotide and structural variation (SV) on a genome-wide, per-gene, and cis-regulatory element basis.

Exome-wide there was no significant enrichment of rare coding variation in any one gene. SV analysis identified an increased burden of rare inversions affecting CTCF-only cis-regulatory elements (P=2.0x10-5; OR 2.1), but these did not affect any single genomic locus recurrently. GWAS of 17 million variants with minor allele frequency [MAF] > 0.001 revealed significant (P<5x10-8) associations at two loci: 12q24.21 (P=7.8x10-12; OR 0.4; MAF 0.37) and 6p21.1 (P=2.0x10-8; OR 7.2; MAF 0.007), both of which replicated in an independent cohort of 398 European PUV patients. Bayesian fine mapping and in silico functional annotation mapped these loci to the transcription factor TBX5 and planar cell polarity gene PTK7, respectively. Both are highly expressed in the embryonic mouse urethra and known to regulate development.

This work demonstrates that non-specific perturbations of broad regulatory networks and chromatin looping may be important in the pathogenesis of PUV. Furthermore, for the first time, two genetic loci for PUV are identified which map to the genes TBX5 and PTK7, providing novel insights into the biological mechanisms underlying this complex disorder. 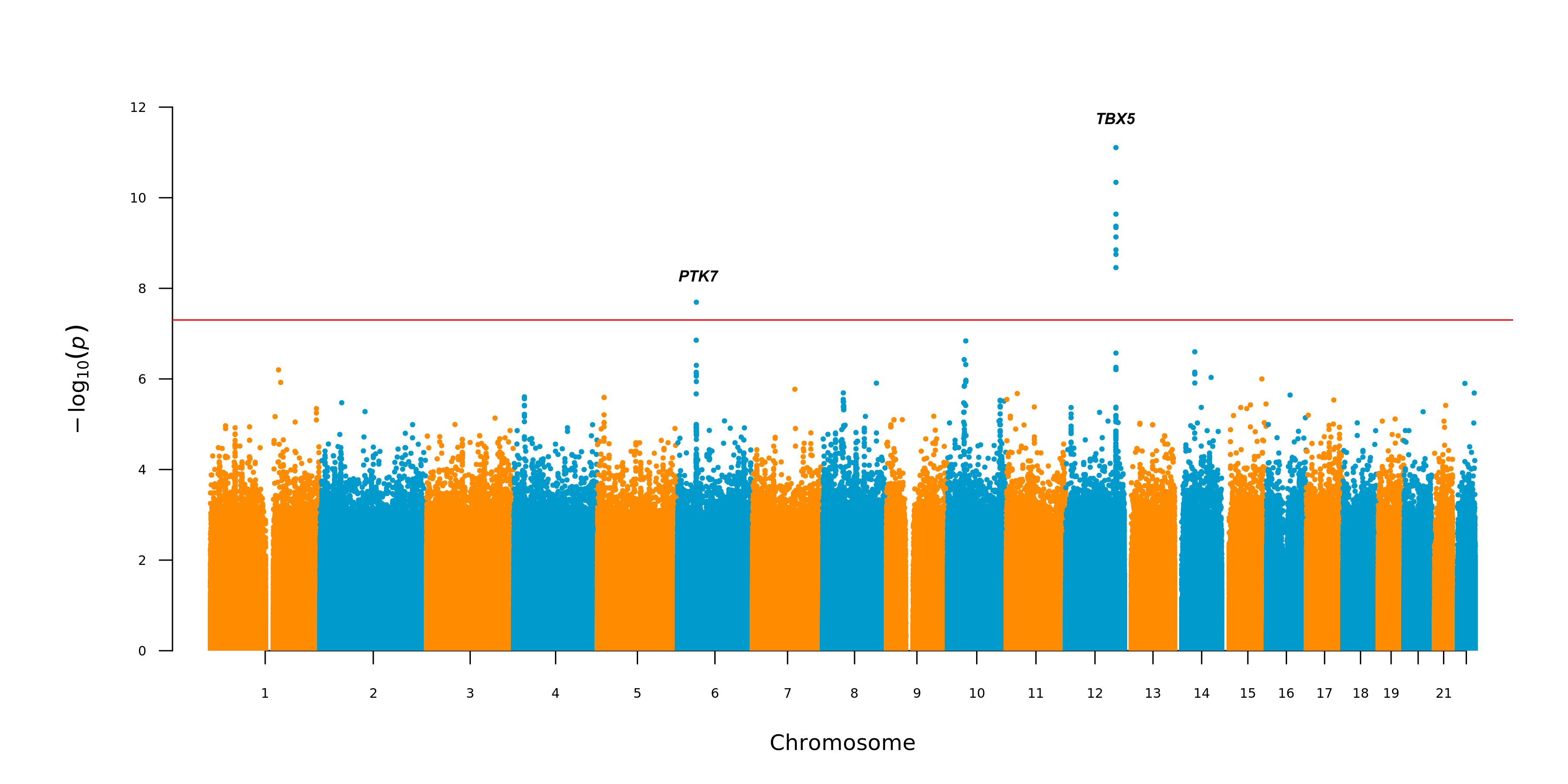 Manhattan plot for GWAS of 132 PUV patients and 23,727 unaffected controls.