Intestinal dysbiosis played a crucial role in chronic inflammation of diabetic nephropathy (DN). Cinnamaldehyde (CIN) is a traditional natural food addictive from a Chinese herb, recognized as antidiabetic and antibacterial medicine recently. This study was to observe the effects of CIN on renal injury and intestinal flora in DN.

A total of four groups of rats included DN group induced by streptozotocin (70mg/kg), treated with CIN (DNC), control (NC), and NC treated with CIN (NCC). CIN was given daily for 8 weeks. Blood glucose, bodyweight, 24h urinary volume(24hV), protein (24hUP), the pathology changes of kidney, and the protein expression of Megalin, Fibronectin, TGF-β were measured. We also sequenced 16S rDNA of the intestinal flora of the rats.

Compared with DN, DNC showed significant improvement with lower 24hUP, decreased TBM thickness, Fibronectin, TGF-β, and increased Megalin. Simpson’s diversity index of the intestinal flora significantly decreased in the DNC group. PCoA (Fig. A) showed different patterns of clustering between the 4 groups (p＜0.01). At genera, compared with NC, g__Lactobacillus decreased significantly in DN, but recoverd in DNC, and it was also confirmed as significant biomarkers by LEfSe (Fig. B). Besides g__Lactobacillus, there were 12 other differentially enriched genera in DNC, such as g__Alloprevotella，and g__Oscillospira. At species, 3 species decreased in DN and recovered in DNC, including s__Bacteroides_massiliensis, s__Oscillibacter_sp_ER4,and s__Lachnospiraceae_ bacterium_ A2. They were anti-inflammatory probiotics that produce short-chain fatty acids. The abundance of 6 genera correlated well with 24hUP (p<0.05, Fig.C). Tax4fun (Fig.D) showed significant differentially enriched functional categories.

Cinnamaldehyde could alleviate renal injury in DN, which was associated with the recovery of the reduced intestinal g__Lactobacillus. 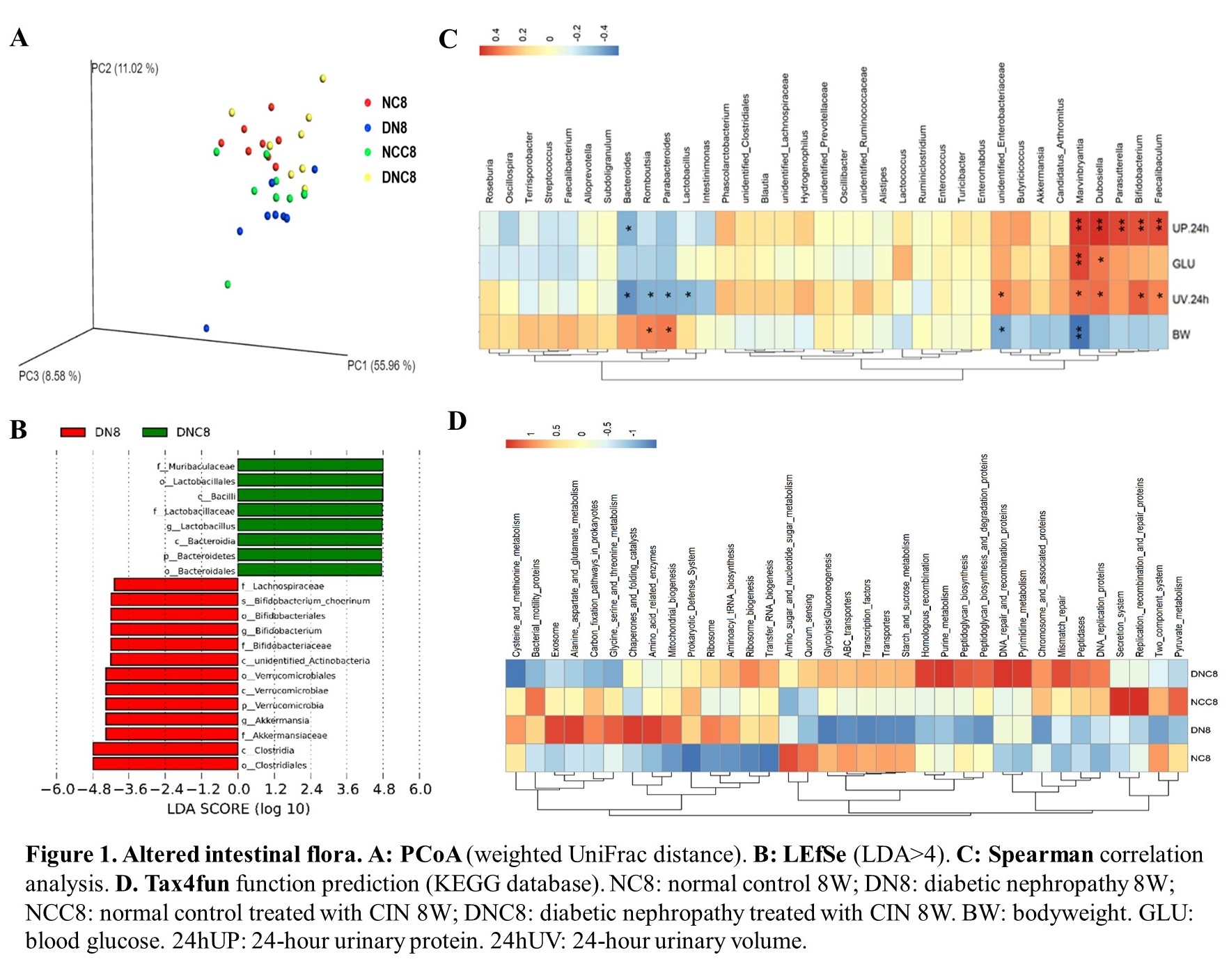