Intraperitoneal (IP) drug therapy provides a convenient route for medication administration in patients on peritoneal dialysis (PD). IP sodium thiosulfate (STS) has been used for treatment of calciphylaxis with demonstrated enhanced calcium extraction. However, the use of this therapy has been limited after a reported incident case of chemical peritonitis. This reported complication did coincide with an FDA recall for STS, and the possibility remains that peritonitis may have been due to particulate matter contamination. We present a case of calciphylaxis which was successfully treated with IP STS without evidence of peritonitis.

An 80 yo woman on PD presented with bilateral lower extremity pain and erythema. This progressed to a necrotic eschar (Figure 1A). Labs were notable for PTH 1267, and Ca x Phos product of 110. Biopsy confirmed calciphylaxis. She underwent subtotal parathyroidectomy and was treated with IV STS. Severe nausea with IV infusions necessitated discontinuation of therapy. She transitioned to IP therapy, 12.5 g of STS in 1L of normal saline as a long dwell day-time exchange to maximize absorption and subsequent mobilization of calcium from tissue. The patient’s pain significantly improved within 1 week. Therapy was completed after 3 months. The lesions almost completely healed 6 months after starting treatment (Figure 1B). Interval PD effluent cell counts, on several occasions, did not change in the PD effluent, although a modest, unexplained decrease in kt/V was noted.

The use of IP medications in patients on PD minimizes venous access complications and reduces clinic visits. In our case, we were able to effectively treat calciphylaxis in a patient who could not tolerate IV STS therapy. No inflammatory activity appeared in the PD fluid, and it is unclear if STS had any other adverse effects. Further studies are needed to understand the impact of this therapy on peritoneal membrane transport characteristics. 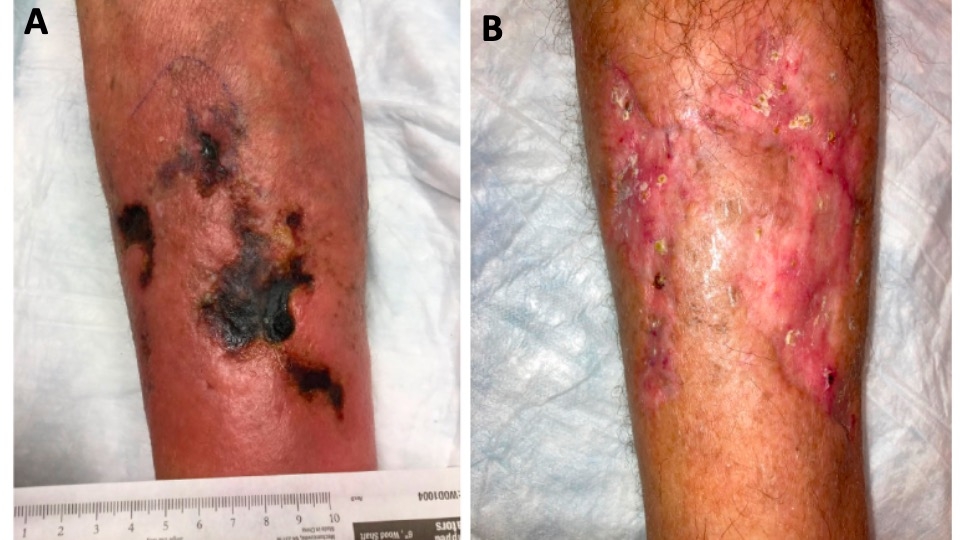 Calciphylaxis lesion at diagnosis (A) and 6 months later (B)