Prescribed Sodium Bicarbonate and Incident CKD in US Veterans

Prescribed Sodium Bicarbonate and Incident CKD in US Veterans

Sodium bicarbonate is prescribed for a variety of medical conditions including treatment of hypobicarbonatemia that may happen in the setting of metabolic acidosis or due to other pathologies. Hypobicarbonatemia is usually observed with chronic kidney disease (CKD) when eGFR < 60 mL/min/1/73 m2 and is uncommon without established CKD (eGFR > 60 mL/min.). It is not known whether incident sodium bicarbonate prescription in patients with normal kidney function is associated with adverse outcomes including de novo chronic kidney disease, which we sought to examine in a large national cohort of Veterans.

In 2,524,842 US Veterans with normal baseline eGFR (≥60 ml/min/1.73m2) and available data on albuminuria in 2004-2006, we examined the association of de novo prescription of bicarbonate medications during the baseline period with incident CKD over 14 years. Associations were examined in hazard models adjusted for demographics, major comorbidities, baseline eGFR, and albuminuria category.

We identified 759 Veterans who were incident bicarbonate users. Overall, patients were a mean 61±14 years old, 7% female, 16% Black, and 5% Hispanic. Bicarbonate users were more likely to be male, Black, smokers, with higher frequencies of comorbidities such as chronic obstructive pulmonary disease, cancer, diabetes, and cardiovascular comorbidities. They also were more likely to have albuminuria. Bicarbonate medication users had a 4.8-fold higher risk of incident CKD (HR: 4.81, 95%CI: 4.38, 5.27).

Veterans with eGFR ≥60 ml/min/1,73m2 who were prescribed sodium bicarbonate exhibited nearly five times greater likelihood of incident CKD. Whether bicarbonate therapy is a surrogate of disease condition with higher risk of CKD or whether it causes CKD directly remains to be examined in additional studies. 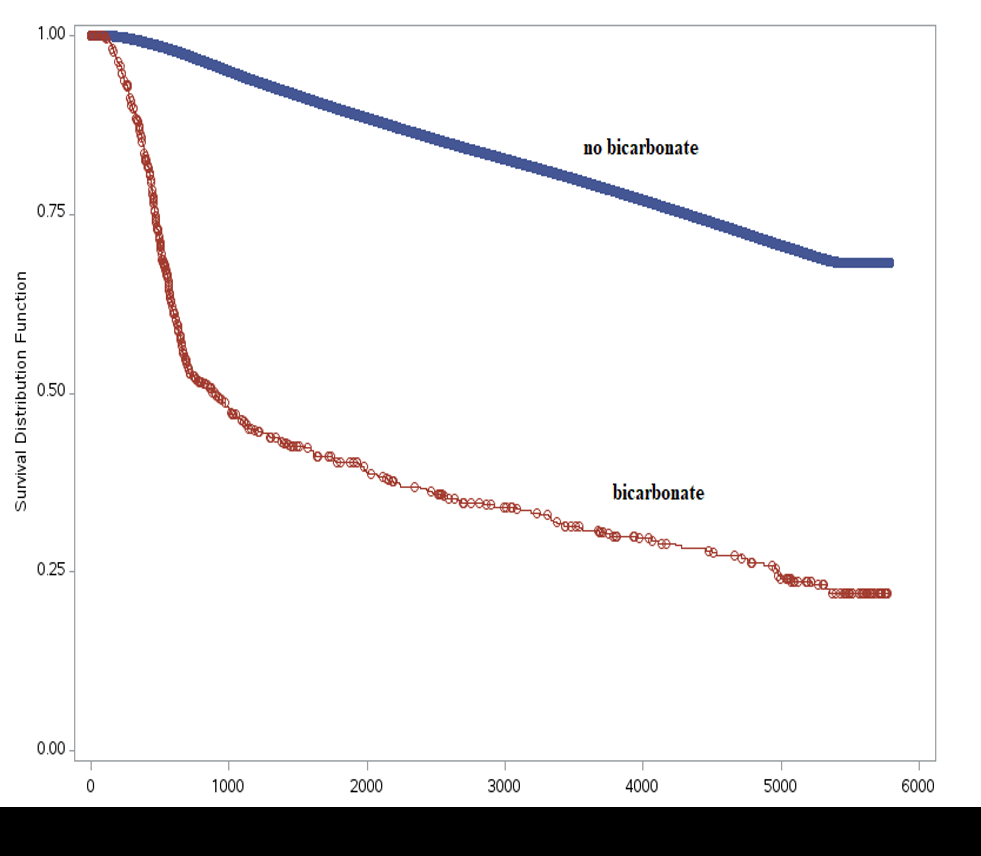