For incident hemodialysis patients, the decline of residual kidney function (KRU) over the first year of dialysis therapy is associated with adverse outcomes such as higher death risk. While several studies have identified biomarkers associated with higher risk of steeper KRU decline, we sought to employ more novel prediction utilizing a random forest regressor to identify important predictors of KRU after one year on hemodialysis.

We retrospectively reviewed a cohort of 5,141 patients who initiated in-center hemodialysis from 2007 to 2011 and had available KRU data at both baseline and during the 90 days after the one-year mark. 80% of the cohort was selected for the training dataset, with the remaining 20% used to test the model. Cross validation was utilized to optimize the number of trees and the mtry parameter. For feature selection, we used the 20 most important features from a random forest using all available predictors.

In our cohort, mean age was 61 ± 14 years, with 66% men, 25% Black, 70% diabetes, and mean baseline albumin was 3.62 ± 0.42 g/dL. Median baseline KRU was 4.24 (6.39 – 2.69). Median KRU after one year was 1.74 (3.14-0.76). The random forest model yielded an overall mean squared error of 2.13 with noticeably stronger performance on the lower end of final KRU values. Using the median response as a classification threshold, the model achieved an AUC of 0.74. A variable importance analysis revealed that the model’s five most important predictors consist of baseline KRU, albumin, weight post treatment session, blood urea nitrogen level, and body mass index.

We showed that a random forest regressor can predict KRU values for hemodialysis patients after one year of treatment with moderately high accuracy. Utilizing our predictive models could aid patients and clinicians in determining the best course of treatment, which should be validated in future studies. 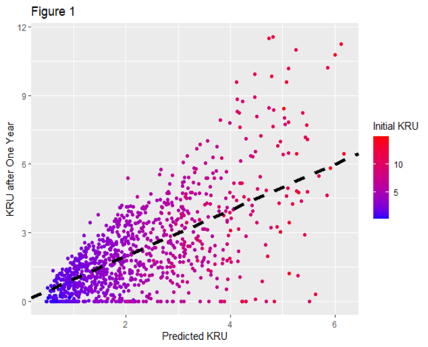