Thrombotic Microangiopathy, Its Clinical Characteristics, Etiologies, and Outcomes: A Case Series of 33 Patients

Thrombotic Microangiopathy, Its Clinical Characteristics, Etiologies, and Outcomes: A Case Series of 33 Patients

Thrombotic Microangiopathy (TMA), is a pathologic pattern of injury that has a variable presentation and etiologies. Here we present a case series of 33 patients from our academic center with biopsy proven TMA, describe their clinical characteristics and compare the differences between drug- induced TMA and other causes of TMA (Table 1)

We collected data on clinical characteristics, detailed biopsy findings, etiologies and treatment details for 33 patients at our institution with biopsy proven diagnosis of TMA

The average age of the patients who had a kidney biopsy diagnosis of TMA was 49.18 years. 13/33 patients were African-American. Upon initial assessment, 29/33 patients had acute kidney injury, 9/33 had malignant hypertension (BP> 180/120 on presentation), and 15/33 had MAHA.

In those in which a cause was able to be determined, 12/33 had drug induced TMA with the most common medication being VEGF inhibitors & Tyrosine kinase inhibitors with anti-VEGF properties (8/12). Three patients had TMA secondary to calcineurin inhibitors and one patient had cocaine induced TMA. 3/33 had complement mediated TMA, diagnosed by confirming activation of the alternative complement cascade.

Every patient with biopsy proven TMA should undergo a thorough history including medication use and work up, so optimal management can be initiated. In our series, 50% of the patients with drug induced TMA improved after withdrawl of the culprit medication. 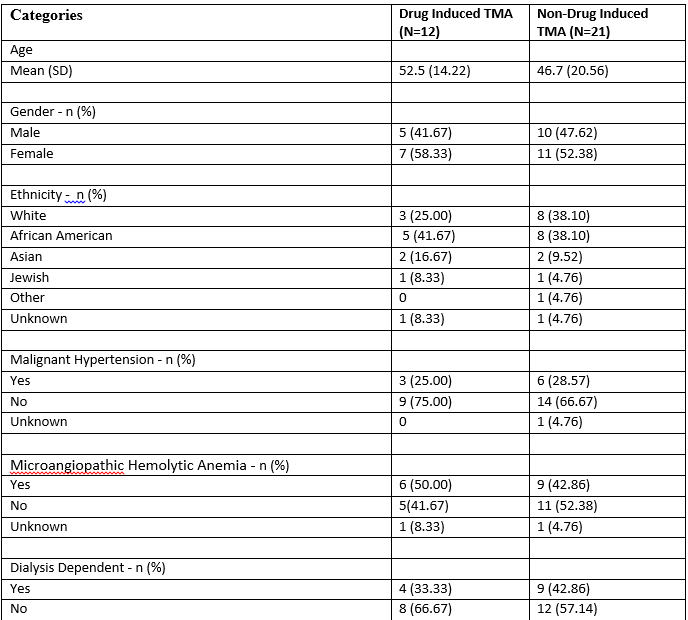