Hyperkalemia is a common electrolyte abnormality following solid organ transplant (SOT). Limited data are available to support the use of sodium zirconium cyclosilicate (ZS-9), a novel gastrointestinal potassium (K+) binder, in SOT recipients. The purpose of this study was to evaluate short-term efficacy and safety of ZS-9 in SOT recipients.

We conducted a retrospective single center study of adult hospitalized SOT recipients who received ZS-9 from 05/20-04/21. The primary endpoint was change in K+ from baseline to within 50 hours of the first dose of ZS-9 among persons not receiving renal replacement therapy (RRT). Data were analyzed using descriptive statistics and multivariable linear models.

The sample included 95 SOT recipients (Table), 68 of whom were not receiving RRT within 50 hours of ZS-9 administration. After adjusting for differences in follow-up time (34+11 hours), serum K+ decreased by 0.88+0.81 mmol/L (p=0.002). The fully longitudinal downward trajectory of K+ through up to 49 hours (p<0.001) is depicted (Figure). Adverse events were infrequent and mild as shown in the Table.

ZS-9 for treatment of acute hyperkalemia in hospitalized SOT recipients was efficacious and safe in this single center study. These findings are important in understanding the utility of ZS-9 broadly in SOT recipients.

Unless noted, table entries are frequency (%) or mean +/- SD. 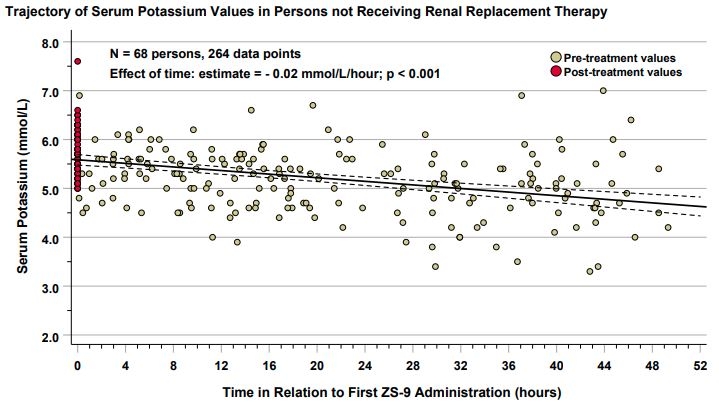