Langerhans cell histiocytosis (LCH) also known as Histiocytosis X is a rare granulomatous disease characterized by abnormal proliferation of Langerhans cells. LCH may be systemic or localized and its clinical manifestations are variable. Diabetes Insipidus (DI) is the most commonly found endocrine anomaly, with a prevalence varying between 5 and 50%.

48-year-old Hispanic male previous smoker with a history LHC was admitted c/o rectal pain. Three years prior to admission he had developed recurrent bilateral pneumothoraxes requiring multiple video assisted thoracoscopic surgeries with lysis of adhesions. A lung biopsy at that time demonstrated LHC. He had not had follow-up care since that time due to economic issues. He said he was drinking 4 liters of water a day to be proactive with his health. He denied thirst. On admission he was noted to have a large anterior anal ulcer, which was positive for Langerhan cell. While waiting in the emergency department without access to water his sodium increased from 137 mEq/L to 147 mEq/L in 6 hours. On evaluation his urine osmolality (osm) was 93 mosm/kg with a serum osm of 305 mosm/kg, and a serum sodium of 146. A repeat sample demonstrated a serum osm of 311 mosm/kg and Copeptin level of 4.0 pmol/L confirming central diabetes insipidus. Brain MRI shown in Figure 1 demonstrated abnormal thickening and nodularity of the distal pituitary stalk. Patient was started on nasal desmopressin.

Although this patient denied thirst or polyuria, with incidental water restriction while in the ED, DI became apparent. The pathological diagnosis of an infiltrative disease such as LHC should provoke a high degree of suspicion for the evaluation of DI. 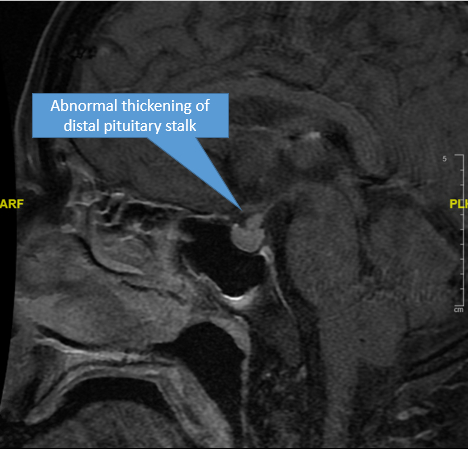