Metformin has been shown to have protective effects in mouse models of renal fibrosis via its effects on fatty acid oxidation but the contribution of glycolysis to this effect is unclear. 6-phosphofructo-2-kinase/fructose-2,6-biphosphatase (PFKFB) is a key regulator of glycolysis in the kidney and is not believed to have an effect on fatty acid oxidation. We aimed to determine if modification of glycolysis has a critical role in metformin's protective effects against renal fibrosis.

Mice with inactivating mutations of the phosphorylation sites in PFKFB2 (PFKFB2 KI mice) were generated, which is predicted to reduce the ability to increase the rate of glycolysis following stimulation. These were compared with wild-type controls. Mice were administered metformin via drinking water and a unilateral ureteric obstruction (UUO) model was used. The degree of fibrosis was assessed by Western blot and RT-PCR.

In the PFKFB2 KI mice treated with metformin, there was decreased fibrosis following UUO as assessed by Western blot for fibronectin (p<0.05) and RT-PCR for alpha-SMA, collagen-3 and F4.80. There was no significant difference between WT and PFKFB2 KI mice treated with metformin in regards to the degree of fibrosis following UUO in any of the Western blot or RT-PCR parameters that were measured.

These data show that inhibition of the regulation of glycolysis by PFKFB2 does not prevent metformin from having protective effects against renal fibrosis in a UUO model. 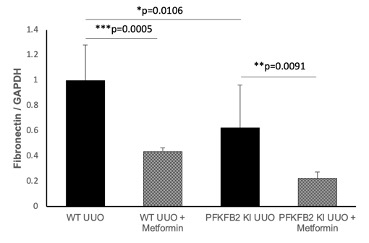