Malignancy after solid organ transplantation is increasing, there is 3 to 5-fold greater incidence than in general population. Major risk factors for non-cutaneous neoplasms are male sex, older age and Caucasians, there are no data on the prevalence of hematologic malignancies after kidney transplantation. We report a case of kidney allograft infarctions causing acute dysfunction secondary to myelodysplastic syndrome and amyopathic dermatomyositis as a paraneoplastic syndrome (PS).

Kidney infarctions were the etiology of AKI as a expression of a hypercoagulable state secondary to amyopathic dermatomyositis (paraneoplastic syndrome) presents and precedes hematologic malignancies in almost 50% cases, awarding poor prognosis at 1, 3 and 5 year with 96.9%, 78.1% and 51.4% overall survival, respectively. Dermatomyositis coexistence with kidney transplant has been described, nevertheless, ADPKD and dermatomyositis is anecdotal. In any case, the diagnosis of Anti-MDA5 dermatomyositis requires ruling out neoplasms. 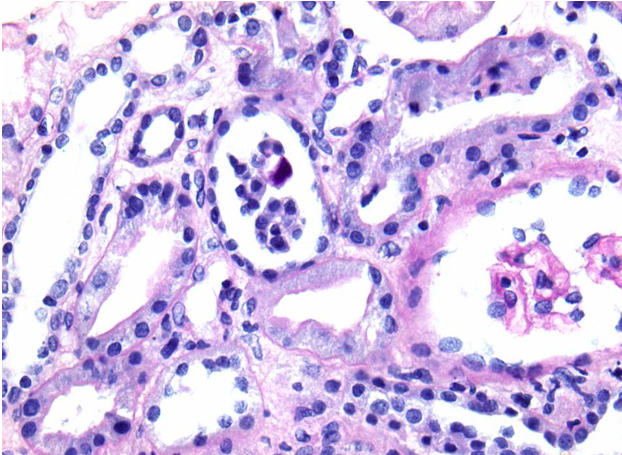