Tubulointerstitial inflammation and fibrosis are strong predictors of progression in all kidney diseases regardless of etiology. Receptor tyrosine kinases such as platelet-derived growth factor receptor (PDGFR) and discoidin domain receptors (DDRs), contribute to renal inflammation and fibrosis. ANG-3070 is an inhibitor of multiple tyrosine kinases receptors including PDGFR and DDR. This study evaluated whether ANG-3070 can slow the progression of fibrosis in the unilateral ureteral obstruction (UUO) mouse model of renal fibrosis.

Male mice were subjected to UUO and randomized to daily oral treatment with vehicle (n=15) or 100 mg/kg of ANG-3070 (n=15) for 10 days after UUO and then sacrificed. Control male animals were age-matched and were not subjected to UUO (n=10). At sacrifice, obstructed and control kidneys were collected and processed for renal damage by hematoxylin-eosin (H&E) staining and scoring (0-8, 0 no damage and 8 damage to >80% of kidney) by blinded observers. Collagen deposition and myofibroblast transformation was determined by quantitative image analysis of picrosirius red (PSR)-stained slides and slides stained for α-smooth muscle cell actin (αSMA), respectively. 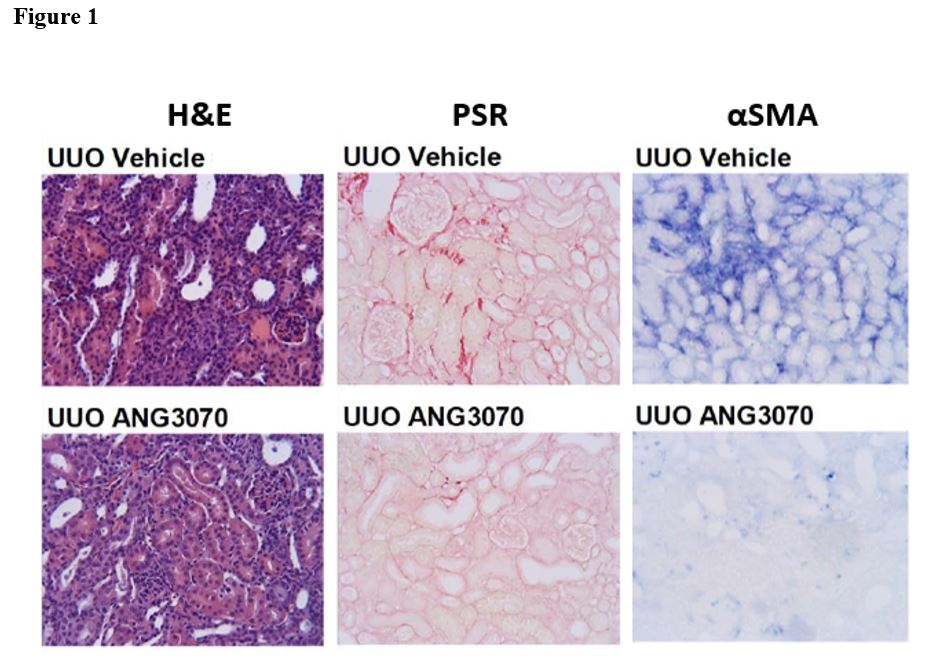