We retrospectively analyzed data from the United Network for Organ Sharing (UNOS) from 1995 to 2017. Living donor transplants, multi-organ transplants, recipients <18 years age at transplantation, and those who died within 1 year of transplantation were excluded. Using multivariable Cox regression analysis, a total of 145,680 recipients were analyzed with death censoring to estimate graft survival with varying cold ischemia times

Compared with cold ischemic time of <5 hours, the graft failure probability steadily increased with increasing cold ischemia time such that the hazards of graft loss were 42% higher with ischemic time greater than 35 hours (Figure 1). Worse graft survival was also observed in males (HR 1.08), increasing donor age beyond 30 years, Blacks (HR 1.77), BMI >30 (HR 1.13), those who had dialysis prior to transplant (HR 1.41), diabetes (HR 1.12), and PRA >90% (HR 1.16). Recipients older than 40 years had a lower graft loss compared to those between 18 and 40 years age.

Prolonged cold ischemia time adversely affects long-term graft survival among deceased donor kidney transplant recipients in the US. The hazards of graft loss appear to be proportional to the duration of cold ischemia time. 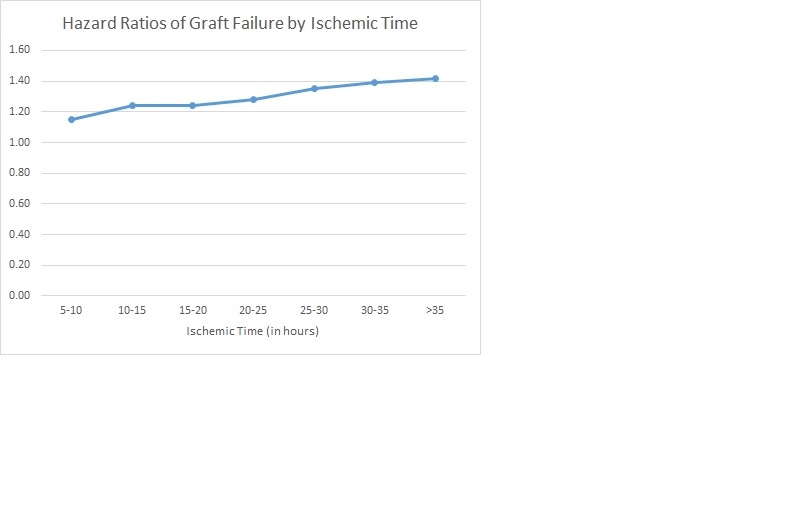