Intravenous Cyclophosphamide vs. Calcineurin Inhibitors as Treatment in High-Risk Idiopathic Membranous Nephropathy: The Benefit in MAKE Is Preserved in the Presentation IV?

Intravenous Cyclophosphamide vs. Calcineurin Inhibitors as Treatment in High-Risk Idiopathic Membranous Nephropathy: The Benefit in MAKE Is Preserved in the Presentation IV?

The use of intravenous cyclophosphamide (IV CYC) in high-risk idiopathic membranous nephropathy (IMN) has not been fully evaluated in the MAKE primary endpoints (serum Cr doubling, ERSD, mortality). In our center, the treatment of high-risk IMN is performed with IV CYC or with calcineurin inhibitors (CNI) according to criteria of accessibility and availability of the drug. Our aim was to compare the immunosuppressive treatment scheme with IV CYC vs CNI in primary MAKE events in patients with high-risk IMN.

Retrospective cohort study. Patients with a diagnosis of IMN diagnosed between January 2012 and January 2020 were included. The patients were treated with IV CYC or CNI. With a minimum follow-up of 12 months and MAKE primary events were recorded in addition to complete, partial, composite response and adverse events at the end of the study.

The comparison between IV CYC vs CNI for high-risk IMN shows similar outcomes focused on MAKE. However, the comparison in composite and partial response shows a result in favor of the use of CNI. This perspective provides clinical evidence about the use of IV CYC, which is why it is suggested that there are possible differences between our findings and those reported so far with oral CYC. Prospective clinical trials are required to have conclusive results. 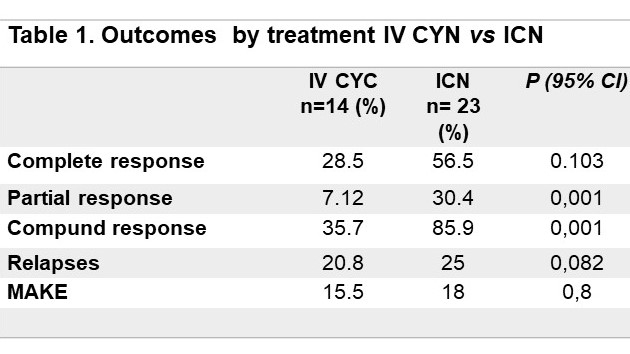