There is a lack of long-term (LT) efficacy and safety data for Mycophenolate mofetil (MMF) in the treatment of lupus nephritis (LN) [1]. We have used MMF since 1999 and undertook a retrospective case-note review of all patients whose treatment included MMF and at least 10 years follow-up (FU).

96 patients with biopsy-proven LN who started MMF ≥10 years ago were identified for the study.

At our unit, treatment regimens changed during the time period reviewed, moving to induction with MMF +/- Rituximab, mostly without oral steroids. We found no difference in adverse events between the Cyclophosphamide and MMF regimens, and patients did equally well on either regimen (Table 1). Importantly, no significant difference in adverse events was seen with MMF exposure ≥10 years vs <10 years (p=0.91) (IQR 11.2-13.6 vs 3.8-7.6).

This is the largest study to report LT outcomes in patients receiving MMF and the first to report data over ten years. LT treatment with MMF appears to be safe and our data supports the use of non-CyP based regimens. The increase in number of patients with ESRD or who died after 7 years FU emphasises the importance of LT follow up data in these cohorts. 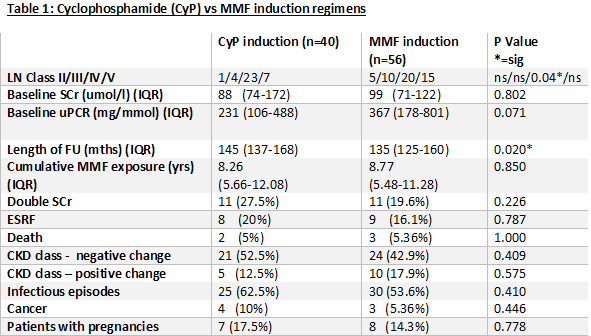