The Effect of ANG-3777 on In Vitro Cell Proliferation

The Effect of ANG-3777 on In Vitro Cell Proliferation

Hepatocyte growth factor (HGF) regulates tissue growth and development by inducing cell motility, proliferation and morphogenesis in multiple cell types including endothelial and epithelial cells. However, it has no effect on proliferation in fibroblasts. ANG-3777 is a novel molecule that exerts similar cytoprotective and regenerative effects as HGF. This study compared the effect of ANG-3777 with that of HGF in stimulating cell proliferation.

In vitro cell proliferation assays were conducted in triplicate using human umbilical vein endothelial cells (HUVEC), rat neuronal Schwann cells, and mouse fibroblasts. HUVEC and fibroblasts were exposed to 5 µM ANG-3777 or 25 ng/mL HGF for up to 24 hours. Schwann cells were exposed to increasing doses of ANG-3777 (up to 10 µM) or HGF (up to 100 ng/mL) for 16 to 24 hours to evaluate the effective concentration at 50% proliferative activity (EC50). Radiolabeled [3H]-thymidine incorporation was used as a measure of cell proliferation. An unpaired T-test was used to compare ANG-3777 or HGF versus vehicle (dimethyl sulfoxide) treatment. 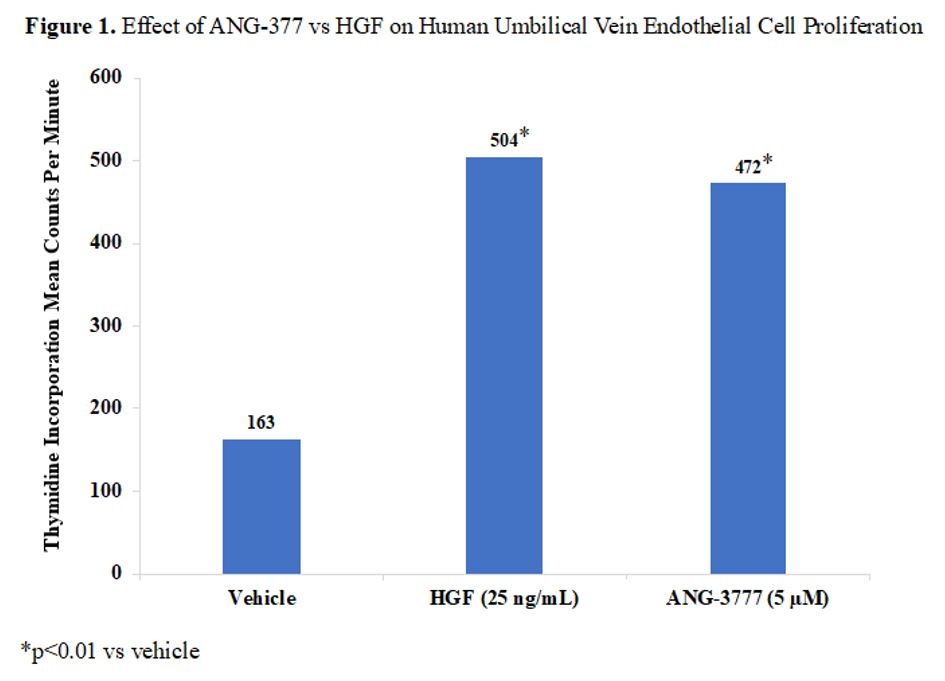