Endothelial cell (EC) dysfunction is a frequent feature in end-stage renal disease (ESRD). The aim of this study was to generate human induced pluripotent stem cell-derived EC (hiPSC-ECs) from patients with ESRD as a model to investigate EC dysfunction.

hiPSCs were obtained using peripheral blood mononuclear cells of patients with ESRD and healthy controls (HC). Next, we generated hiPSC-ECs and the expression of endothelial markers was assessed by immunofluorescence. The differentiation efficacy, EC dysfunction, and molecular signatures of EC-related genes based on microarray were compared between the ESRD and HC groups.

In both groups, hiPSCs and hiPSC-ECs were successfully obtained based on iPSC or EC marker expression. However, the efficiency of EC generation from hiPSC was lower in ESRD than HCs. In addition, ESRD-hiPSC-ECs failed to form interconnecting branching point networks, unlike HC-hiPSC-ECs in the tube formation assays. In a microarray analysis, transcripts associated with oxidative stress and inflammation were upregulated and transcripts associated with vascular development and basement membrane extracellular matrix components were downregulated in ESRD-hiPSC-ECs compared with HC-hiPSC-ECs.

In conclusion, ESRD-hiPSC-ECs showed a greater EC dysfunction based on functional assays and molecular profiles and it can be a useful disease model to investigate EC dysfunction in ESRD. 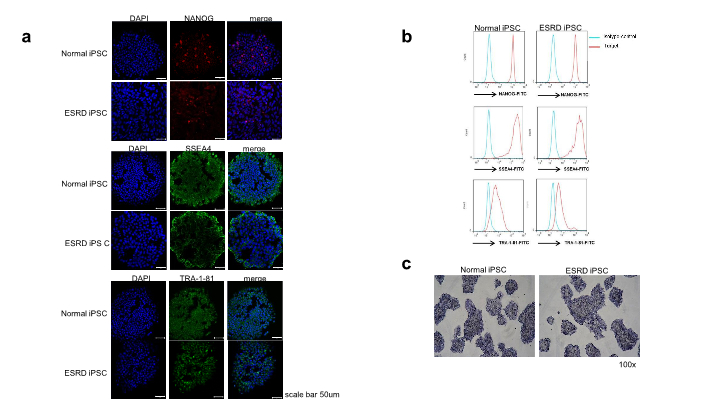 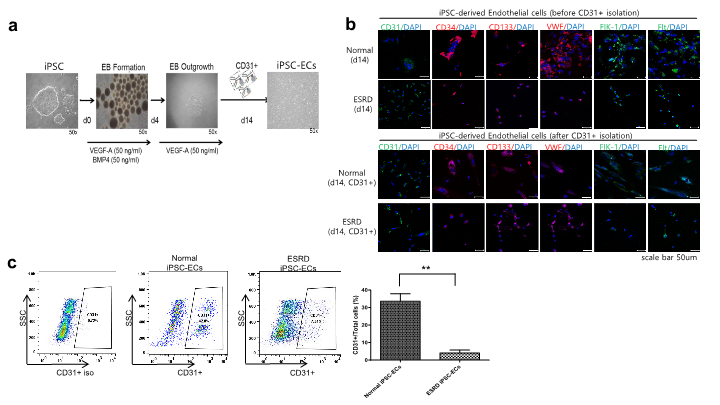