Children receiving dialysis for end stage kidney disease secondary to lupus nephritis (LN) have decreased survival and a lower likelihood of kidney transplantation compared to children with non-lupus glomerular diseases (NLGN). Whereas a previous North American Pediatric Renal Trials and Collaborative Studies (NAPRTCS) analysis reported equivalent patient and graft survival for LN patients when compared to matched controls, a comparison of recent transplant outcomes in children with LN and NLGN has not been conducted.

After adjusting for race, LN patients were less likely (p<0.001) to receive a preemptive transplant (OR=0.12). There was also a trend for LN patients being less likely to receive a living donor (LD) transplant (OR=0.8). When comparing pre- and post-2000 eras, time to 1st rejection and graft survival improved for both LN and NLGN groups, although the graft survival benefit in LN group was not sustained after 3.5 years of follow-up. Time to 1st rejection and graft survival for LN patients remained inferior to NLGN group during both eras (Figure 1 & 2).

LN patients are less likely to receive a preemptive, and possibly a LD transplant. Overall, outcomes for both LN and NLGN transplant patients improved after 2000, but the outcomes of the LN group were inferior to those of the NLGN group during both time periods. 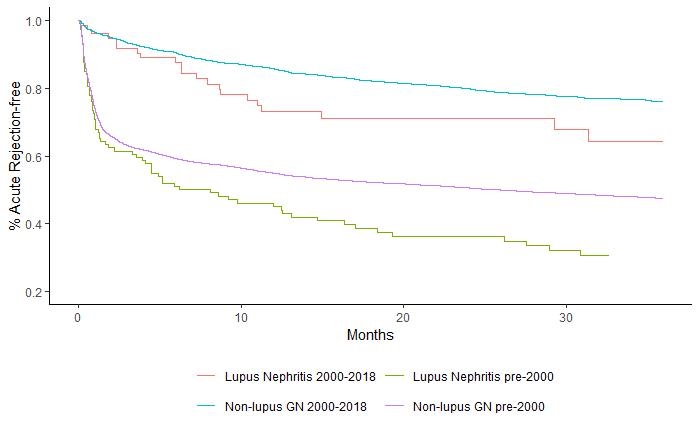 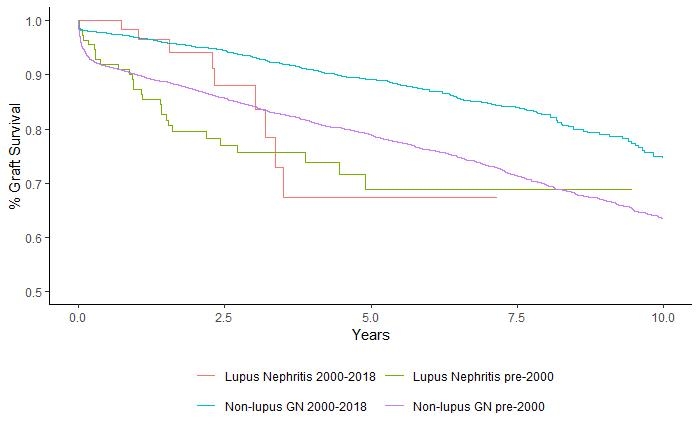