Hemoglobinuria for the Early Identification of Atypical Hemolytic Uremic Syndrome Relapse: Data from the ItalKId-HUS Network

Hemoglobinuria for the Early Identification of Atypical Hemolytic Uremic Syndrome Relapse: Data from the ItalKId-HUS Network

Atypical hemolytic uremic syndrome (aHUS) is at risk of relapse any time, thus patients require lifelong monitoring. We suggested that patients could be monitored for relapses, with hemoglobinuria (twice weekly and during intercurrent diseases) based on the hypotesis that a thrombotic microangiopathy involving the glomerulus, cannot take place without hematuria. However this assumption has not been validated.

The aim of the study is to analyze our experience with the mentioned approach in patients with aHUS who have never been treated (group 1), on treatment (group 2) and who have discontinued C5 inhibition (group 3). The records of all aHUS patients managed or referred to our Center from January 2009 to March 2020 were included and the analysis for the presence of hemoglobinuria was restricted to the period following primary remission with the aim of validating this biomarker as a reliable one for the early identification of relapses. Patients with persistent hemoglobinuria, although in documented TMA remission, were excluded. A positive test was defined as hemoglobin ≥1+. Patients reporting positive urine dipstick were addressed to laboratory investigations to rule in or out, the diagnosis of aHUS relapse.

84 patients with aHUS (50% females) were included with 1517 determinations of hemoglobinuria during a cumulative observation period of 261 patient-year (Figure). Hemoglobinuria for the early diagnosis of ongoing aHUS relapse shows a sensitivity of 100% and a specificity of 87.4% with a PPV of 10.5% and NPV of 100 %.

Hemoglobinuria is a very sensitive and acceptably specific marker of aHUS relapse. This finding and its validation may have an important positive impact both on patient’s quality of life and on the outcome of disease via an early diagnosis of relapses. 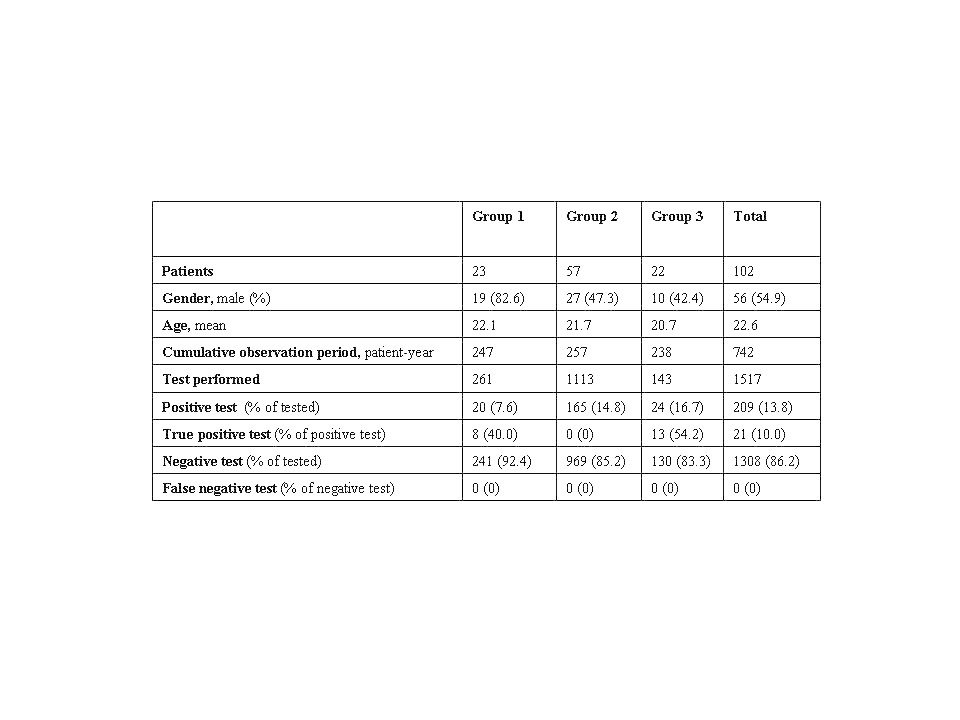