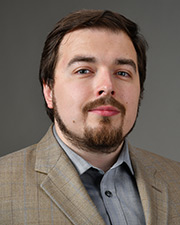 Kidney is central in the control of systemic water balance of the organism. AVP facilitates aquaporin 2 (AQP2) translocation to the apical plasma membrane to augment water permeability of the collecting duct (CD). Inability of CD to respond to AVP signal causes NDI leading to polyuria, dehydration and thirst. Stimulation of CD water reabsorption by AVP can only occur in the presence of positive osmotic difference between the cytosol and luminal fluid. Extracellular hypotonicity increases [Ca2+]i and causes cell swelling due to AQP2-driven water influx. The role of the osmosensitive [Ca2+]i signaling in renal water transport and urinary concentration remains unknown.

The employed techniques include simultaneous measurement of [Ca2+]i dynamics with Fura 2 and the rate of cell swelling as a readout of the AQP2-dependent water reabsorption in freshly isolated split-opened CD of wild type and TRPC3 -/- mice; immunofluorescent detection of AVP-induced AQP2 trafficking to the apical membrane and metabolic cage balance studies.

TRPC3 is a Ca2+ permeable mechano-activated channel abundantly expressed in the CD. We found that TRPC3 deletion or pharmacological inhibition precluded [Ca2+]i elevations induced hypotonicity and severely slowed the rate of cell swelling indicative of diminished water transport in the CD. TRPC3 -/- and WT mice had comparable serum and urine osmolarity in control conditions, but exhibited a significantly greater bodyweight loss, and urinary volume excretion after 24 h of water deprivation (WD) despite higher AVP levels when compared to WT. Furthermore, osmosensitive [Ca2+]i elevations were greatly increased in CDs from WT but not TRPC3 -/- animals after 24 h WD. Greatly accelerated rate of cell swelling was observed in WT, while it was only modestly increased in TRPC3 -/- mice under the same condition. Using immunofluorescent microscopy, we found that AQP2 translocated to the apical plasma membrane in WT, while maintaining mostly cytosolic localization in TRPC3 -/- after 24 h WD.

Our studies show a significant role of TRPC3 in osmosensitivity and regulation of AVP-dependent AQP2 trafficking in the CD. TRPC3 deletion compromises systemic water balance producing an NDI-like phenotype.